The investigation, "Albanian Telecoms Deal Cost ‘$1m to Buy Off Politicians’, Claim US Businessmen," revealed that a controversial Bosnian businessman, Damir Fazlic, a fixer with powerful friends in Washington and the Balkans, requested $1m in "investment" from US partners for Albania’s Democratic Party in order to secure a lucrative telecoms contract.

The investigation formed part of a series of hard-hitting stories on Fazlic reported in the last few months by Marzouk and his team, focusing on the businessman’s ties to the former Albanian Prime Minister, Sali Berisha, and his family. Below, a series of emails show how two American businessmen discovered the the telecoms contract was forged. 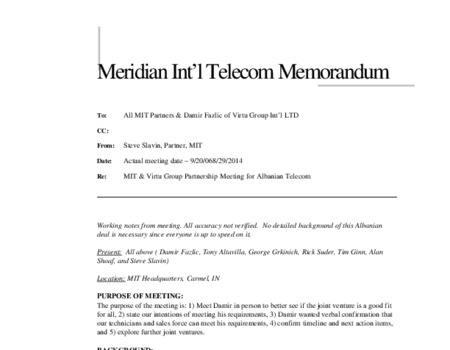 Controversial Bosnian businessman Damir Fazlic, a fixer with powerful friends in Washington DC and the Balkans, requested $1m ‘investment’ for Albania’s Democratic Party in order to secure a lucrative telecoms contract, allege his former US-based business partners. The allegations have emerged in a cache of documents obtained by BIRN from the US firm Meridian Telecommunications LLC. Among the trove of information is the minutes of a crucial meeting from September 2006. Fazlic, a close associate of the then Albanian prime minister, Sali Berisha, is reported to have told his US partners they needed to make the payments because ‘though the current PM is set for another three years, we really need the right local govt people to win. This helps that cause before the end of the year elections.” Read the story here: http://www.balkaninsight.com/en/article/albanian-telecoms-deal-cost-1m-to-buy-off-politicians-claim-us-businessmen